You can find a French translation of this article here.

One of the specificities of historical weapon-based martial arts is that training and competitions are invariably distanced from the “real” application that would take place with sharp blades and potentially mortal or life-altering wounds. In the modern civilized world, no practitioner has seen, much less experienced, that actual application of the art. This makes training inherently speculative; you have to figure out and project into the mindset of people who would have had a much closer relationship with the lethal results of these arts, in order to assess the validity of moves and tactics. In doing so, I find it very important to keep in mind the risks and rewards that are associated with duelling situations, the implied context of most of the European source texts. Although my personal focus is rather the 16th century sword arts, I consider that this applies to most cultures where sharp swords were used in earnest.

As people get into free-fencing, they will often encounter problems. When you start out your performance is often less than stellar. You cannot manage to fence cleanly and historical techniques do not really pop up naturally. Some people have a temperament that leads them to charging in and swinging hard and fast, which is hard to deal with safely without double hits. All of this can easily lead to the thought that there is something missing; that real fights would have been different in some ways. Quite often, the saying is: “Give them sharp blades, and you’ll see how cautious they become!”. Or the equivalent: “In real fights people give the utmost priority to their defence, not getting hit is the sole concern”. Certainly people sparring with sharp swords now are a lot more composed, controlled and cautious, for good reasons.

However this is missing an important part of the question. When you bring sharp swords into modern freeplay (whether you actually do it or just imagine), you increase the risks a lot. Suddenly, life is indeed on the line. A misstep can have you stumbling on a point. This is not the level of risk that you would meet in a real duel with someone intent on wounding you, but it is still much higher than more common freeplay with safety equipment. On the other hand, the rewards remain exactly the same. You simply win one of the many exchanges that you will hopefully get that day. This is not a more accurate reflection of the real thing, you have simply radically shifted the emphasis towards caution. You would have to increase the rewards as well, to an amount that is probably going to be hard to reach in the modern world.

See, people do not get into a duel solely out of a concern of self-preservation, and never did. It has always been obvious that in a duel against an opponent of comparable skill, you have more chances to be wounded than not. Getting into a duel is a decision to put your life on the line to defend or obtain something deemed equally important: honour, vengeance, something like that. Even in a self-defence situation, it takes at least one person motivated to harm the other to get a fight at all. The reward may now seem pointless to us, even immoral, but it was there. That duels took place at all indicates that there was some balance between the risks and rewards, and disproportionally increasing risks, or rewards for that matter, creates training situations that have a fundamentally different dynamic.

This late account (early 20th century) is often cited as evidence for the great difference between fencing for sport and with sharp blades. It is true that Aldo Nadi points out the difference, but the reader may care to note that even at that time, when winning the duel was less important than fighting it, there was some sort of blood lust overcoming or balancing the fear of the sharp blade:

Following the first double touch, I mean double wound, my adversary had not remained perfectly silent; evidently he had hoped — as did everyone but me — that the whole thing would stop then and there. it was now my turn to breach the strict dueling etiquette. Quietly, but firmly, I replied: “Stop annoying me, I am going to stay here until tomorrow morning.” I was young.

Afterward I was told that at this point one of the spectators had muttered: “Now he is going to kill him.” he was a veteran duelist and friend. he had not heard my words, but had seen my left forefinger resolutely pointed at the ground.

In such moments man can consciously lose all understanding of pity, generosity, and of the meaning of life itself. He knows that his seditious will may spell death for a fellow man whom he has no well-founded reasons, nor definite wish, to kill. Through somewhat silly codes of honor and more or less ridiculous regulations created by his kind alone, he arrogates to himself the right of murder. Where is that part of God he pretends, boasts, and almost scientifically asserts to exist within his own being? Uncheckable and unchecked, Mr. Hyde comes in.

One has but to read a little bit of the accounts of real-life duels that happened with alarming frequency in France in the 16th century, for example, to find all sorts of reckless, dangerous or suicidal behaviour. Consider the famous French duel des Mignons involving six nobles in 1578, out of which only two eventually survived. Two died on the spot, one died of his wounds the day after, another thirty-three days later. Not a single one got away unscathed, the least serious injury being a superficial wound to the arm. Certainly sharp blades did not make these guys particularly cautious or restrained. That outcome is fairly similar to what you tend to get in modern sparring with masks and blunt blades. 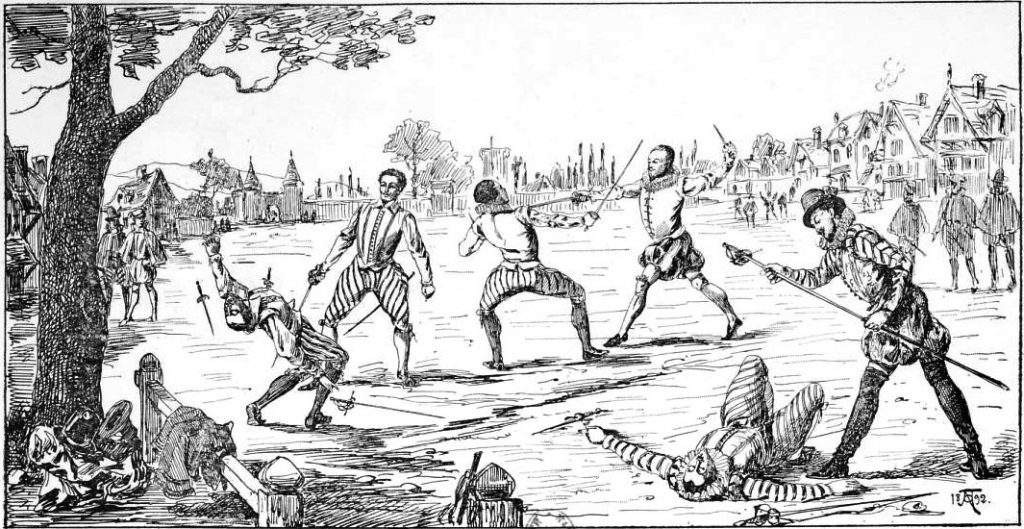 Duel of the Mignons, 1578 (artist rendition). A very bloody affair.

Some people get a mistaken idea of the application of the arts of fighting from looking at technical treatises. These sources show ideal situations, that supposedly anyone was striving for. As such, they will of course not dwell on double hits, which are obviously failure from both sides, and they will not instruct in suicidal tactics, although they do mention how to behave against untrained, unskilled or enraged opponents. An actual fight, especially between similarly skilled opponents, is rarely going to be a juxtaposition of ideal techniques culminating in a perfect hit. This is not necessarily a problem with modern conditions, safety measures or competitive mindset. I would even say that it is essential to experience that imperfection of the real fight, together with the occasional moments of perfection when what you want to do takes place exactly as intended, leaving your opponent vanquished and you unscathed.

There are certainly distortions associated with modern freeplay with safe blades and protections. There can be strategic uses to double hits, for example, that would not exist in real fights, or only in very specific situations. Safety equipment can distort the perception and mechanical options that are available. Nonetheless, bringing up the danger of sharp swords as a remedy to any and all perceived sparring imperfection and focusing on the risks at the expense of the rewards, gives a distorted vision of fencing that is unambiguously contradicted by historical sources. Duels for life were not the meticulously controlled affair that modern freeplay with sharp swords and no meaningful protections has to be.

4 thoughts on “Risks and rewards”