In a sword fight there are two main modes of perception that can be used to assess the actions of the opponent and decide on a course of action. The first way is to look; sight uncovers many things such as distance, position, speed, sometimes even intent when you read a person’s face. The second way can be broadly called feeling: it is the perception of forces exerted by and on our bodies. This is active anytime you are in contact with the opponent or his weapon either directly with your body or through your own weapons. Different terms have been used in various traditions: in German it is called fühlen, in French sentiment (sometimes sentiment du fer).

Sight and Feeling work differently and give different information. It is instructive to look at how these were valued and meant to be used according to period sources. I have chosen to contrast two: the treatises of Girard Thibault and Salvator Fabris. Being relatively late sources, they go into some details.

Let us start with Girard Thibault, talkative as always, in the introduction of a chapter dealing with the Sentiment:

[…] the whole Advantage of the Art consists in making confident approaches. Which cannot be practiced without having complete knowledge of the importance of Feeling and Sight. […] Because they are intertwined to such degree that the operation of one can neither be started or pursued without being assisted by the other at all times. They are the only two supports of the whole Exercice. Sight is used to come duly in presence ; Feeling to be safer there ; through Sight you get to Feeling, and through Feeling to the execution itself; such that just like light is the guide of the eyes, so too the eyes are guides of the motive capacity. Sight is necessary in all kind of measures; but Feeling since it can only be practiced by touching, can only be used in a narrower measure: however it has in exchange very noble advantages, thanks to which it helps and guides us, not only to work on the motions of the opponent in time, but with the required exactness and moderation. Because it is the sense that always recognizes the first beginings, and the diversity of force, and their planned path; things that are more necessary than any other and to which Sight brings so little usefulness that it is not even worth taking into account.

This is quite a balanced view of why you need both and how they interact. However, Thibault goes a little bit further. He is convinced that using Feeling will make you safer and surer, because you can feel the variation in force before seeing the movement, and deplores the lack of attention devoted to it by his contemporaries:

All of these examples clearly demonstrate the great usefulness of Feeling, which is nevertheless held in low regard among the Masters of this Profession. But seeing that the truth of it is so obvious, they are forced to recognize its strength. As a matter of fact as soon as their blade is attacked, they feel inconvenienced, and try to free it by all means, be it stepping back, disengaging, using feints, or even heavier actions […]. At a bare minimum, since they are bothered by the binding of the blades, they should think that if they receive some constraint, the opponent is not free either […]. They should be striving to diminish their inconvenience, and to augment that of their adversaries by the means of Feeling itself, without losing courage immediately as if it was a desperate situation, to which there is no remedy, other than to escape at full tilt. Because experience [and even common language] demonstrates that the touch is of great importance for the judgement and the knowledge of things […]. Through what mean do they want to understand the very beginnings of the motions of the Opponent, to work against them in time, other than by the touch of the blades, to which the beginnings discover themselves by their weakness, always half a beat earlier than you can perceive by sight.

As a consequence, Thibault has an habit of seeking the bind and displacing the blades by a significant amount, trusting his perception to anticipate the reactions of the opponent. Having tried it a little bit, it is indeed a common reaction to try and free the sword. But do we have a master advocating this, or is this simply the reaction of the untrained? Well, Salvator Fabris for example is the polar opposite of Thibault on this matter:

It is important to remember that, as you find the opponent’s sword, you should never touch his blade with yours. The closer he is to you, the safer and surer your advantage if you have your forte [strong] subtly situated opposite his debole [weak]. Most of the time, if the opponent’s sword is not molested, he will not realize that you have found it. Whereas if you touch it, he will very likely realize what you are trying to do, and will have occasion to perform a cavazione, withdraw or change his guard in order to free his sword, and you will have lost your advantage.

Besides, if you touch the opponent’s sword, you somewhat disrupt your own form: if you wanted to take advantage of a sudden tempo, you could not do so because your sword is bound by the pressure of the opponent’s blade. Even if you merely rest your sword over the opponent’s blade and he performs a cavazione, you cannot prevent your point from falling slightly, which is enough to make you miss a tempo.

Instead, if you keep your sword suspended in the air, you are always more ready in every occasion, your attacks are more in tempo, and you are not forced to control the opponent’s blade, which is something that often causes coming to grips and makes fencing degenerate into wrestling.

Finding the sword is the Italian way of gaining a positional advantage that prevents the direct attack from the opponent while opening a line of attack for the fencer. It seems then that Fabris wants to rely on sight as much as possible. He does not ignore feeling, as evidenced by the plates showing how to deal with someone pressing the sword; but he does not want to use it tactically in the same way Thibault does. Thibault wants as much information as possible, even if it means the opponent also gets some. Fabris wants the opponent to stay in the dark as long as possible, trusting his own perception. Maybe this was personal in a sense. If you have a better than average visual perception, it is beneficial to compete with others on this field and only leave it when absolutely necessary. If you have a keen sense of touch, you are better off using it as much as possible. This being said, training affects your performance also in this regard, and I consider it very possible that both approaches can give good results with enough training.

These two masters have the same context. They lived in the same period, wrote for the same public. Thibault even discusses how to fight someone following Fabris’ method! This highlights that context does not explain everything, and that you cannot deduce historical fencing styles purely from it according to some universal principles. They use the same tools, feeling and sight, but with a different method. The properties of the tools do not change, what you seek with them does. 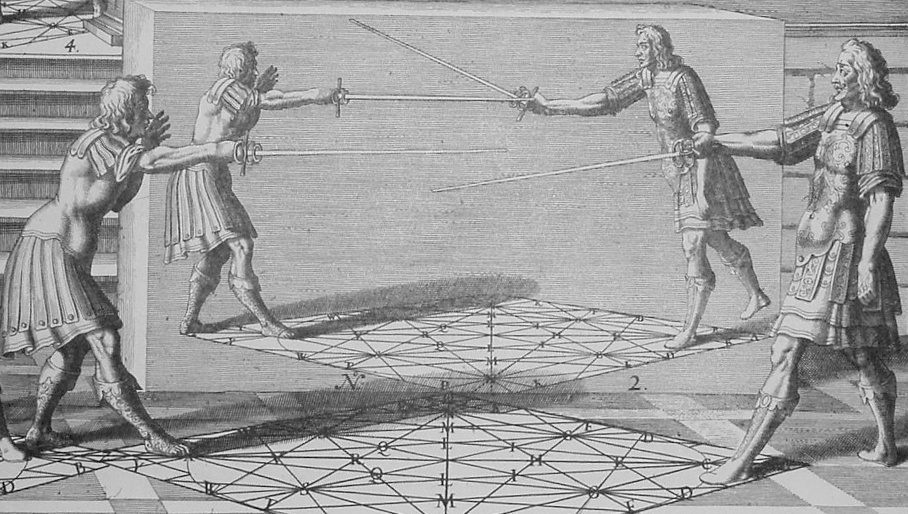 The first two actions of table 33 in Thibault’s treatise, on dealing with Fabris’ method. Thibault’s student is on the right, Fabris’ student on the left.

One thought on “Feeling and Sight”