Going from one Instance to the next

How does Thibault use his concept of Instances to fight?
Thibault describes two main cases:

In the first case, the basic instruction is to keep control of the centerline no matter what feints the enemy is making, and counter decisively as he reaches second Instance (because at that point he is so commited to the attack that he cannot go back and avoid the counter). You let the adversary come to second Instance and then you go to the third… and beyond as you push your blade all the way through him. 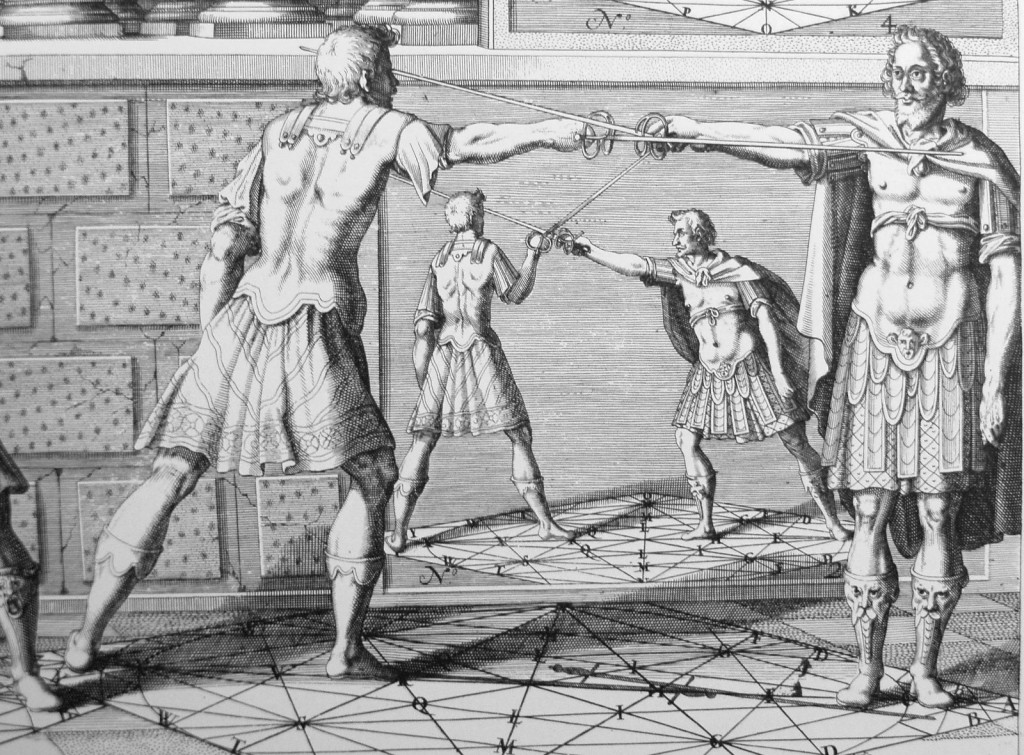 An example of countering an opponent who advanced unwisely all by himself, shown in book 1, table V.

In the second case, you go carefully from first to second Instance, either binding his weapon away, or opposing his guard with some sort of counterposture that blocks lines of attack, often walking at an angle. Of course Thibault spends some time describing what to do against the straight line because it is such a powerful defensive posture. Then, once you are in second Instance and in an advantageous position, you go to the third while keeping this advantage with a more offensive and threatening motion. Of course you adapt to the reactions as you go, always focusing on your protection when you are between first and second Instances, and focusing on offense as you are closer than second.

The second Instance therefore plays the role of a decision point, when you switch your care from keeping your position secure to wounding the enemy. This is pointed out in the conclusion of Table VI (Zacharie is the name of the fencer that consistently gets hit, Alexandre is the one that follows Thibault’s principles):

It appears from these examples, that it is necessary to come to the sword, prior to attacking the person who holds this posture of the straight line. Because the large measure of the First Instance is advantageous and proper for defenses, as much as it is uneasy and dangerous for the one that wants to attack it. And indeed if you have payed attention to the demonstrations of Table V before, all the thrusts from Zacharie, that he is shown to have thrown from First Instance, have been met by Alexandre at the Second. Because even though he (Alexandre) stood not moving from his place, all the wounds he gave weren’t started before the instant when the Enemy came forward up to this Second Instance. […] And believe strongly, that neither the speed of the body, nor the swiftness of the arm, are worth anything compared to a good approach. So that all the Practice of our Exercise will be such, that we will always go pressing the Enemy, until reaching the measure that is fitting and just for the executions that can be made; that is, if he does not come upon us himself, relieving us from this labour.
Girard Thibault, conclusion of Table VI

Apparently there were those who tried to rush quickly from first to third Instance, but Thibault says to not rely on your speed in this. It might mean that however fast you become, you will always be too slow for a trained fencer to let you through unharmed.

Of course, you don’t dwell in the second and third Instance unless you have a strong position. Often the third Instance is reached just as the opponent dies.

Links to other traditions

There are two sources which I think fit best the Instances system and Thibault’s tactical choice.

The first one is I.33 with its custodia/obsessio system. We have little textual information about distance in I.33, and the pictures do not seem realistic enough that we could tell which Instance it is. However the tactical approach seems to fit. The fighters start in a custodia, a ready position. One of them approaches with an obsessio, that generally blocks lines of attacks and allows for a very quick strike in the absence of a reaction. The counter to that is to bind and play from there, until a fast strike can be delivered. I think it would make perfect sense that the obsessio and subsequent binding game happens at Second Instance.

Then you have this bit in Georges Silver’s work:

When you attempt to win the place, do it upon guard, remembering your governors, but when he presses upon you & gains you the place, then strike or thrust at him in his coming in.

If you replace “the place” by “second Instance” you get a sentence that is almost exactly like Thibault’s advice. Another related observation is that a full speed simple motion of the hand (for example cutting from a point up to a point forward position extending the arm) happens roughly over half a step. Which means that if you cut from second Instance you can do it at full speed, which is also mirrored by Silver’s word that from the place you can strike freely and quickly. Therefore in my opinion, “the place” in Silver is, as far as distance is concerned, somewhere between Thibault’s second and third Instances.

In these two you have this switch of emphasis from self-protection (closing lines, guarding) as you come to second Instance, to attacking as you go to third Instance.

Fabris, in his second book, has tactical choices that are clearly similar to those made by Thibault. But the first book is less easy to link, because he takes options frowned upon by Thibault.

What is missing in Thibault’s book? Essentially, ways to go to the second Instance beyond guards and binds.

Thibault does not like feints, perhaps for moral reasons, so he never uses them. He knew about them but thinks they do not work reliably and display good fencing. Yet, it’s one possible way to close: you feint an attack somewhere, the adversary abandons the center, you take it up as you reach second Instance and then strike. This is done quite a bit in Italian fencing. When you do this kind of attacks you also have that decision point around half a step (second Instance) when you decide which way to go next.

Thibault never shows cuts against an extended arm from first Instance. I guess this is because the complex hilt grants a significant protection, and the blades used in his book are not powerful and cut-oriented enough for it to pose a significant problem. With heavier cutting weapons it is a very viable method, and I guess it’s the reason why starting guards at the longsword for example tend to be with arms withdrawn. A cut to the advanced target is also heavily used in Bolognese swordsmaship as an initial provocation.

He doesn’t show either how to enter in an ’empty’ tempo of the adversary (for example changing guard). In some cases this can be used: the empty tempo protects you as you come from first to second, then it’s too late and you take up the first opening. Truth to be told it is rare to have a long enough tempo in such situation.

Cutting to the body from the first Instance seems to be only possible if you manage to get more power during that longer time, because the power of your cut will be your strongest protection. With cutting weapons, you can’t take the centerline as efficiently (because your arms are at risk of a quick counter if you bring the sword forward) and this might be the only reasonable option if you want to take the initiative, that’s how I interpret the german vorschlag. The alternative is to creep into second Instance but this is dangerous because it becomes a speed game of who will launch the strike first. Note that of course power does not have to mean lack of control, and you still have this decision point as you cross second Instance, provided that your step is not over-committed.

Of course this whole last part is wide open for discussion. Using Thibault’s instances as an analysis tool might be misguided if your tradition provides other concepts that fit the role. That said, very few traditions provide as much details as Thibault, so this can be a very useful help!