Since I really like Thibault’s book and found his theory very useful for understanding fencing, I tend to refer to it often, and yet I cannot point to a good explanation of his ideas. So I’m going to try to provide this here.

As you might know Thibault published his book in 1628 and has been heavily influenced by the Spanish School (la Verdadera Destreza) though other influences show in his work. So some of the things detailed below can be linked quite easily with other Spanish writings. But since I don’t know them as well I will try to let Thibault stand by himself here.

The quotes I present are translated by me, therefore probably not the best translation. Of course I don’t have an English translation because it would have little interest for me, given that I can read the work in the original French… I tried to be as faithful as possible to the text, nonetheless it probably reads a lot better in Thibault’s French than in my English!

On with some theory first…

Distance in Thibault is represented by what he calls “Instances”. This is an unusual term in fencing even in French. It is not used there in the common meaning found in English; rather it means urgent request, pressing solicitation, entreaty… These are positions that elicit a reaction. They are defined with the fencers standing in the “straight line” position strongly associated with Spanish fencing: body upright, feet close together (roughly shoulder width), slightly profiled, arm and sword straight towards the enemy parallel to the ground. Thibault defines them thus:

The Second Instance is the one that comes so close to the adversary […] that one can put the tip of the sword on the elbow, and therefore one can touch him in half a time with a simple leaning of the body firm-footed. […] This measure is called Second Instance, because it cannot be reached at first coming, without having assured the approaches before: and being there, one works with more advantage […].

From Second Instance one comes to the Third […]. It is a measure from which one can wound the ennemy, holding the body straight without any motion of the feet, doing nothing else than straightening the arm.

In short, further away than the first Instance we are out of reach and thus relatively safe. At the second Instance things get dangerous, the fencers can touch one another firm-footed. At the third Instance they can wound one-another through the body firm-footed (they can push their blade as far in as the space between second and third Instance, which is half an arm).

Fair enough, but the first Instance is not precisely defined here yet. In table IV we have a very clear depiction, though. 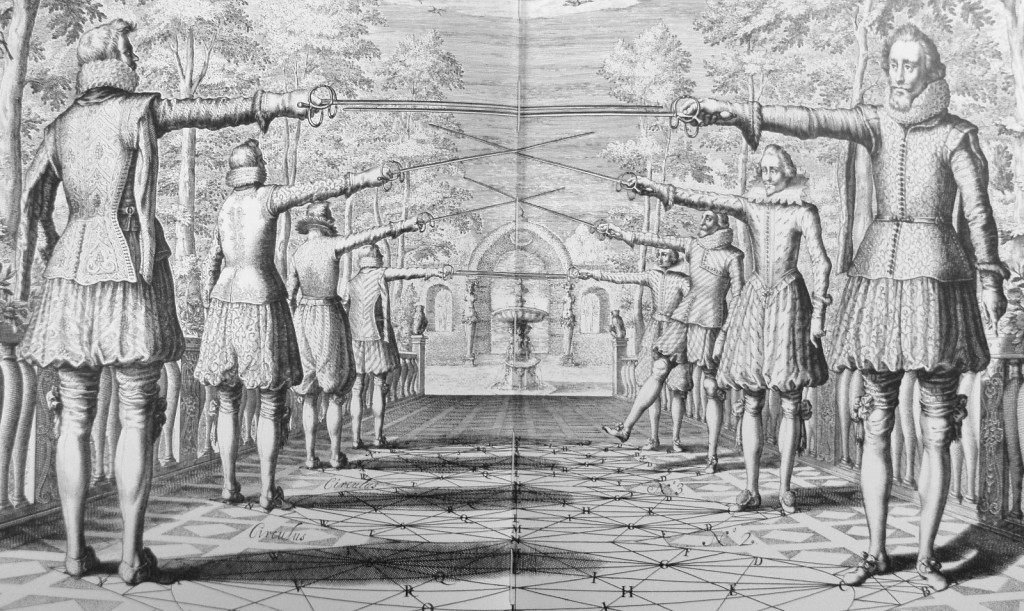 In the foreground of table IV (book 1) we find the clearest depiction of the posture of the straight line and the largest distance, the First Instance.

And at the same place there is a whole discourse about it:

It is the first Instance, true beginning of the game, holding the participants in a just distance and totally proportionate to the bodies and weapons: neither too wide; for from it one can reach the enemy in a mediocre time; nor too close; for in it one can defend well enough from all the attacks of the contrary.

If the enemy has a longer sword than yours, take good care that the point never passes beyond the branches of your guard, so that there always remains the length of one arm between you two, which is a reasonable distance, and big enough to prepare yourself in time for your defense. […] If his sword is shorter than yours, […] you will take the first Instance a little closer, ensuring that [his point] does not passes [your guard].

As you can see, the first Instance is based on defense first and foremost. It is the edge of the safe distance, and one arm length is enough to give you the time to defend. Incidentally, one arm length is also roughy equal to one natural step (check it at home!).

To sum up, three distances:

Note that once expressed like that, the Instances are universal and can be used with any stance and any weapon length (even different lengths for the two fighters). The techniques will change of course depending on the weapons, but these three distances remain important. Thibault is adamant that understanding and judging these distances is essential for a fencer.

First and third Instance are commonly found concepts in many arts, for obvious reasons. Second Instance is something I haven’t found explicitly elsewhere, but I found it a very useful analysis tool as I’ll detail later.

Thibault does not have a detailed formalism for time, at least not to the level of what he has for distance. But that’s because distance and time are intertwined, for big motions cover great distances in more time.

[…]it is possible to move the whole arm to deliver a cut to the enemy from the first Instance. […] On should move only from the elbow to do the same from the second. […] Upon the third Instance […] it can only be done from the wrist. […] At the second and third Instances, the body is so close, that as much as it uncovers itself, and as much time that gives to the opponent to do something, is as many unavoidable dangers that are chanced.
[…]
What we say about cuts must also be held true for thrusts. Because it is the observation that gives us the ability to moderate all the motions according to their time.

From further away, you can afford to make wider motions and adopt more open positions, because you will have time to cover again if the adversary moves against you. Conversely, as you come closer your attacks become swifter and are less easily parried. Thibault does not specially give the order of the motions, rather he describes the actions as one whole with the feet and hands playing their part simultaneously. 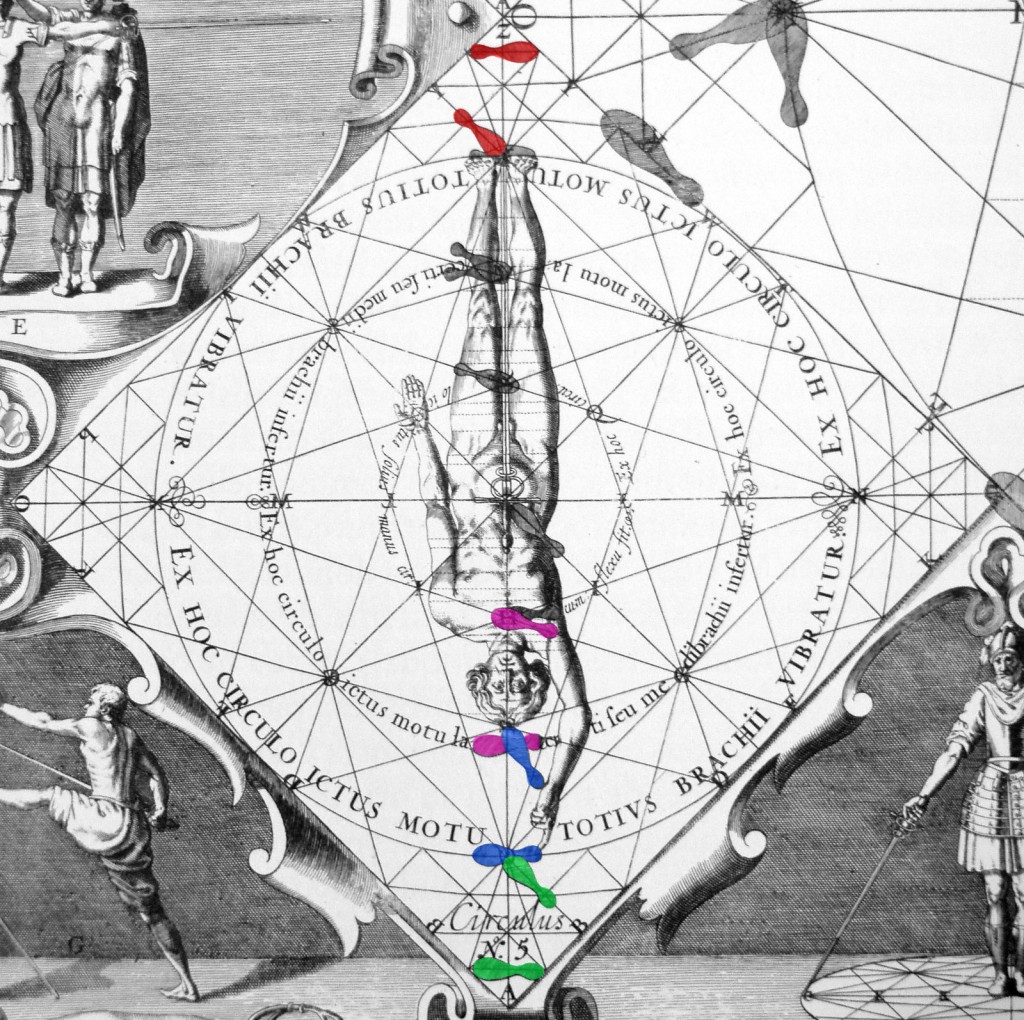 One of Thibault’s diagram in book 1, table I. I have colored the parts most relevant to what I discuss here. The diagram is meant to be drawn on the floor. The red footprints represent where the opponent is standing (the feet are relatively close together as they ought to be in the straight line posture). The green footprints show where you stand in first Instance, the blue are in second Instance, the magenta are in third. The human figure is to scale; you can check how far apart the instances are: from first to third the front foot moves one arm length.
The circular inscriptions point out the possible movements that can be made in order to attack and defend: the whole arm at first instance, the elbow at second, the wrist at third. These are circles because they are the figure you walk along when the opponent walks the outer circle (even if that situation is mostly theoretical)

That’s all for today, next post will be about how Thibault sees the fight unfolding as you move from first to third Instance (which you have to do in order to wound the opponent).