In the 16th century, cuts begin to be sorted according to the portion of the arm that moves while delivering the cut. I don’t know exactly when that notion popped up; the earliest advice of the sort that I know of is in Di Grassi (the original dates from 1572):

The Arm likewise is not in every part of equal force and swiftness, but different in every bowing thereof, that is to say in the wrist, in the elbow and in the shoulder: for the blows of the wrist as they are more swift, so they are less strong: and the other two, as they are more strong, so they are more slow, because they perform a greater compass. Therefore by my counsel, he that would deliver and edge blow shall fetch no compass with his shoulder, because while he beareth his sword far off, he giveth time to the wary enemy to enter first; but he shall only use the compass of the elbow and the wrist; which, as they be more swift, so are they strong enough, if they be orderly handled.
Giacomo di Grassi, His True Art of Defence, 1594 edition in English

Another example in Fabris:

Capoferro shows a preference for cuts from the elbow:

[…] please be advised that mandritti and riversi are delivered from the elbow and (tempo and measure allowing) with the help of the upper arm.

What ‘with the help of the upper arm’ exactly covers is a bit unclear. It may refer to a smaller rotation around the shoulder joint. The link to time and measure is echoed in Thibault:

[…]it is possible to move the whole arm to deliver a cut to the enemy from the first Instance. […] One should move only from the elbow to do the same from the second. […] Upon the third Instance […] it can only be done from the wrist. […] At the second and third Instances, the body is so close, that as much as it uncovers itself, and as much time that gives to the opponent to do something, is as many unavoidable dangers that are chanced.
[…]
What we say about cuts must also be held true for thrusts. Because it is the observation that gives us the ability to moderate all the motions according to their time.

I’ve already written about Thibault’s Instances before, basically the first Instance is the furthest from the opponent (think one full step), and the third is the closest (where you stand when you can wound without moving the feet). The furthest you are form the opponent the bigger the opening you can afford in your defence. 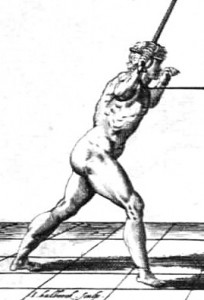 A cut meant to be from the elbow, in Fabris 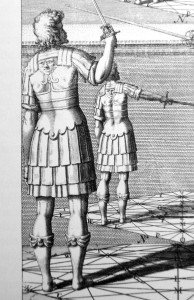 A cut done ‘with the help of the elbow’ in Thibault. Foreground shows the cut chambered, background shows it diverted by the opponent.

Given that there are few depictions of people in the act of cutting (see my previous article here), it is not surprising that there are even fewer unambiguous representations of people doing one of the three variants. The image on the right, from Fabris, is meant to show a cut from the elbow according to the text. It is however not very obvious, because the upper arm has clearly moved out of line as well. Is this indicative of the involvement of the upper arm recommended by Capoferro? Hard to know.

There is also the image on the left from Thibault, table XVII, where a cut ‘executed with the help of the elbow’ is presented. Here too the upper arm has moved a bit but not so much, so this is as far as I know the best illustration of the position of the arm during a cut from the elbow. It also shows in the background how the arm can swing past the target rotating from the shoulder, even for a cut from the elbow. Presumably this may be true for cuts from the wrist as well.

I think this classification came to light when people started to fight predominantly with the sword and arm pointed to the opponent. From any posture with the arm retracted, you are almost surely going to cut from the shoulder according to that classification, because your starting posture is exactly as opened as it is when you chamber a cut from the shoulder. The only difference is that you will not offer an exploitable opportunity as you lift your arm. The quote from Thibault would make me very defiant of an interpretation that lets the fighter get close enough to wound firm-footed while in an open posture.

Although the advice here is predominantly geared towards single-handed weapons, some of it still applies to two-handed weapons, mainly the trade-off between how large the swing is and how powerful it can be.