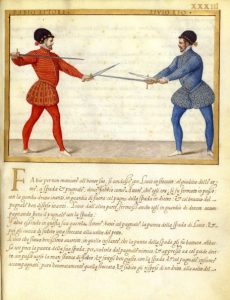 The manuscript treatise by Giovan Antonio Lovino does not get the attention that it deserves. This richly illuminated work can be dated to about 1580, is written in Italian, and is conserved in the French National Library under the index ‘MS italien 959’.

Lovino was a Milanese master who dedicated his work to the king of France Henri the third. He claims to have a fairly long professional fencing experience of 22 years. It is likely that he hoped to gain the favour and interest of the king in order to get a teaching position or even compose a larger, extended book to which he alludes in the manuscript. We do not know what happened upon the reception of the manuscript, and no other work by the master has surfaced. Italian fencing was very fashionable at that time in the French nobility, so it is not so surprising to find a work in Italian dedicated to a French king. Milan had some popularity in terms of fencing, being home to several masters who we know by name, but have not found the work of yet. The city is also mentionned in Brantôme’s Discours sur les duels as a good place to learn fencing – but then, most Italian cities were.

The whole manuscript has only been available in high resolution since April 2019, which contributed to a relative neglect of this treatise. I’m aware of only one English translation of the work, but it is based on an extremely abridged French edition which does not do the work justice, as it ommits the majority of the text and includes only low quality black and white images. There is now a much better transcription and translation to French, that has all the text and images. Hopefully a full English translation will follow!

The work is split in two parts. The first is a series of illustrated plays, covering many weapons and combinations: single sword, sword and dagger, sword and cape, sword and buckler, sword and targa, sword and rotella, two swords, longsword, two-handed sword, a short spear or pike, and even combat against two and fighting against a rider. The second part is a dialogue between Lovino and his sponsor, about a variety of fencing topics. Each part has a number of original and valuable features.

Throughout the work, Lovino uses vocabulary that can be seen elsewhere (names of the cuts depending on their trajectory, for example), but also words that I have not seen elsewhere. An example is the use of scodere (to shake) for the action of freeing the blade from an engagement, and frequently calling cuts in general coltellate (litterally ‘knife cuts’). These can be seen as evidence that he belongs to his own tradition, although all share a common basis.

Technically, Lovino stands at the transition from earlier styles to rapier. He has a strong emphasis on sword alone, then sword and dagger, uses simplified guard positions, and puts an emphasis on finding the sword and pursuing from there. On the other hand, he uses cuts liberally, exposes many weapon combinations, and has more close play and wrestling than later rapier treatises. The swords illustrated are also shorter than the typical Italian rapier of Fabris and the like, although it is always tricky to trust illustrations fully in that regard (the blades are invariably very thin, even for the two-handed sword). Being a transitional work is consistent with the tentative dating to 1580.

The treatise contains, in my opinion, some of the most beautiful images of 16th century Italian martial arts that can be found. Here is a gallery of some of the pages that are publicly available from the French BNF: 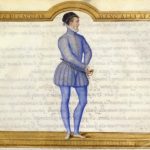 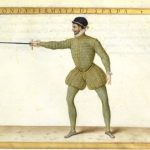 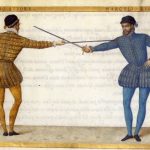 A thrust to the shoulder. 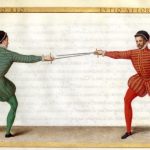 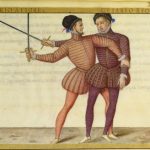 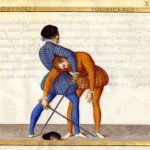 Controlling the opponent with wrestling. 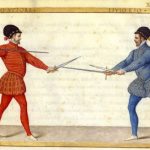 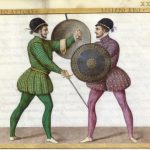 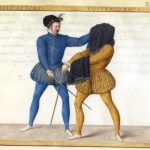 Blinding the opponent with the cape, thrusting to his leg.

But there is much more than beautiful images in this section. The illustrated plays have a format that is unusual in fencing litterature. Ordinarily, plays are short sequences, a succession of a handful of attacks and defences at most. Alternatively, there are bolognese assalti which are very long sequences but described as solo work, from which the reactions of the opponent are mostly absent. Lovino includes whole duels, albeit imaginary. On most plates, you have an agent and a patient, with a description of several sequences and tactical decisions. Some of these duels end with wounds, but most do not, concluding with a draw or a reconciliation. Although the technical description is a bit terse, you get more tactical context in this way than you’d find in other works. It also gives a fascinating window into what people of the time thought of as an idealized duel, even though these duels are meant to emphasize certain aspects of fencing with a rough pedagogical progression, and are not representative of how a real duel would unfold. Here is an example text, from plate IX: 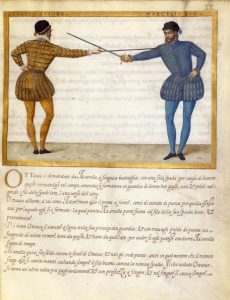 A thrust to the shoulder

Ottavio is called by Marcello in single combat with the single sword for a matter of honour. They meet in the specified field, and place themselves in the inside ward, well adjusted, rassembled and careful, turning the edges of their swords against one another.

Then Ottavio, as the agent, seeks to hit first. He tries to enter with the point through the same way he is already placed. Marcello carries that point outside with the edge of his sword, well and promptly.

Again Ottavio takes his principal ward towards his target and, with great work, goes feinting with the point sometimes on one side, sometimes on the other, to see if he can drive Marcello outside of time.

Marcello stands solid against the feints of Ottavio, and does not believe in them. To the contrary, he always turns the true edge against the opponent’s sword as the feints advance. He sees Ottavio turning a feint this time with more vigour and speed, advancing even further. Marcello still reacts in a similar fashion, always carrying the point outside with his true edge as the ennemy advances.

Then Ottavio, seeing that Marcello defends himself vigorously, decides to find a way to strike him. With this thought, he lowers his sword and body and uncovers himself so that Marcello could follow him and strike. But his previsions are deceived, because Marcello pursues him with the point from the outside, seeking the body of his opponent.

Here Marcello makes a mistake. Wishing to pursue Ottavio, he should advance justly, and turn his true edge against the opponent’s sword. Thus he would have been assured that Ottavio’s sword could not hurt him. As soon as Ottavio realizes the mistake, he quickly assumes the inside ward and enters on the right with the body profiled, and pushes a great thrust in Marcello’s shoulder.

Such a thrust can be parried in a few ways, here are the main two. The first is that Marcello should adjust quickly the true edge of his sword in the inside ward, profiling his body behind it. The second is to lift the sword hand, and lower the point, carrying the opponent’s sword towards the ground outside of your presence, going a little bit forward and to the side, following with the left foot behind the right. In these two fashions Marcello could have defended himself from such a thrust.

Should anyone want to make a public HEMA display that is paired work, but not a sequence of disjointed techniques, Lovino’s fights are a very good source. With 66 chapters to pick from, there is a wealth of material there. It also provide a historical source for a study of how to feel out and adapt to opponents, putting techniques in context, something that is often lacking. It is, as far as I know, a presentation format that is unique to Lovino.

The dialog that makes up the rest of the manuscript is less original in its format, but has useful information on a number of uncommon topics, as well as Lovino’s answer to many common questions. Here is a short, incomplete list of the topics that are touched upon:

Lovino’s work is decidedly not a manual, that would guide you step by step to learn the whole art, as Thibault’s work intends to be for example, even though there is some progression in the successive plates. The inclusion of the pedagogical progression is very informative in that respect and gives a useful hint on what the historical syllabus was like. It compliments the plates in a sense.

The description of the way to hold the sword is one of the most thorough that I’ve seen in such early works. It is not completely unambiguous, but far better than nothing. It insists on the need to have a tight grip with the bottom two fingers, and on the usefulness of a secure grip in order to resist disarms.

Lovino claims to be the first one to write about finding the sword, which he defines as follows:

It seems to involve fairly more contact and pressure than you’d find with the later use of the term, though, especially in Fabris who prefers to find without making a contact at all. In Lovino the finding is often accompanied by a significant pressure that can take for example the sword from a high line to a low one.

6 thoughts on “The Valuable Lovino”